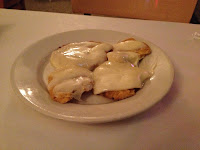 If you’re ever in Tampa and are in the mood for some great Latin Cuisine, a great recommendation is El Puerto in Ybor City. Chef Nelson Umana has over 20 years of experience working in the international Latin cuisine industry. Collecting and perfecting traditional recipes from countries like 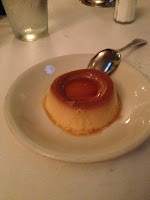 Argentina, Peru, Mexico, El Salvador and Cuba. This cozy restaurant, which can be found on the corner of 4th and 17th in Ybor City, is one of the best Latin restaurants in the area!

I began my culinary journey through their menu by starting with an appetizer. The selection I chose combined two of my favorite things, fried plantains (Tostones) and cheese, better known as Tostones Gratinados. I have to admit, at first I was a little worried about combining the two but after my first bite it was clear that they were meant to be. Who knew Tostones and cheese would go so well together.

Then came the meat de resistance. A seven meat dish consisting of Argentinean sausage, short-rib, skirt steak, chicken breast, pork chop, sweet bread, and morcilla topped with onions and  served with two sides. These perfectly grilled
and seasoned meats were a pleasant surprise, each having a unique grilled flavor and seasoned to perfection. Accompanied by arroz blanco (white rice) and frijoles negros (black beans), this meal called Parrillada Argentina – For One is feast that can feed one person for about three days.

To top this manly feast off, I had my beloved flan and shot of espresso. So if your ever in Tampa, make sure to stop off at El Puerto in Ybor City and treat yourself to one of the best dinning experiences you can get for a reasonable price. 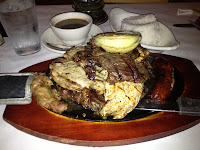